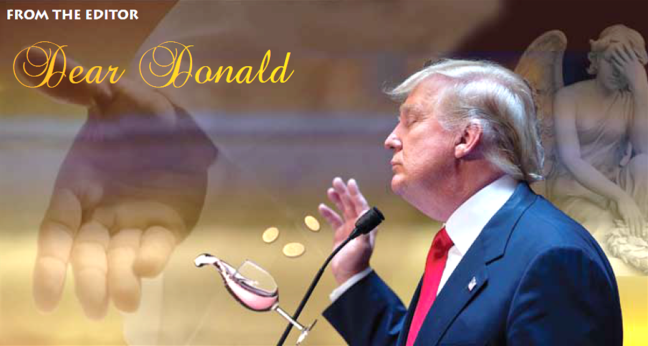 The editor of Voice Male magazine says he has come into possession of a letter God recently sent to real estate mogul and presidential candidate, Donald Trump. Rob Okun reports he received an email from the Lord requesting him to immediately and broadly distribute the letter.

I have been troubled for some time knowing you don’t feel a need to ask Me for forgiveness when you’ve done something wrong. And now, with your strong remarks to one of my staff, Pope Francis, I felt even more urgency to write.

“I love God and I love my church,” you said last July. That’s good. Yet, in practically the same breath you said you don’t ask Me for forgiveness for any of your transgressions. You told a CNN reporter, “If I do something wrong… I just try and make it right. I don’t bring God into that picture; I don’t.”

Don’t bring Me into the picture? Really? And then you said—talking about Communion—that “When I drink my little wine (which is about the only wine I drink) and have my little cracker, I guess that is a form of asking for forgiveness, and I do that as often as possible because I feel cleansed.”

Why do you need to ask Me for forgiveness? Pope Francis told a reporter that, “A person who thinks only about building walls—wherever they may be—and not building bridges is not Christian. This is not in the gospel.” Donald, that was an opportunity to stop, to think, to pray—to take some time in deep contemplation. At the very least, it was an opportunity to request an audience with the Pope. Instead, you said, “For a religious leader to question a person’s faith is disgraceful… When the Vatican is attacked by ISIS—which as everyone knows is ISIS’s ultimate trophy—I can promise you that the Pope would have only wished and prayed that Donald Trump would have been President…”

The Pope pray for you, Donald?

Inciting people’s fallen angels is not the road to a principled life. Calling for a ban on Muslims entering your country? Advocating spying on mosques? Considering establishing a database of all Muslims living in the U.S.? That’s your idea of how to “Make America Great Again”?

You want people of faith to support you, yet you keep making divisive, mean-spirited remarks. A couple of my senior people— archangels Michael and Gabriel—think I’m being too soft on you. I disagree; I believe you understand where I’m coming from without My having to lash out with a mighty hand and an outstretched arm; with great terror and with signs and wonders.

Sexist comments about women? Racist remarks about people of color? Humiliating and denigrating Muslims, immigrants, and minorities? Saying, “I could stand in the middle of 5th Avenue and shoot somebody and I wouldn’t lose voters?” Oy.

Donald, one of my angels showed up for a staff meeting on Friday sporting a T-shirt with the words, “Love” and “Fear” printed chest high, and spaced far apart. The arrows beneath each of the words pointed to the same phrase: “You Choose.” A real WWJD moment, don’t you think?

A few months ago I wrote to Kim Davis, the county clerk in Kentucky who was refusing to issue marriage licenses. I told her the essence of all I do can be boiled down to two words: “Love wins.” Today, thinking about you, Donald, I’m adding two more: “Forgiveness counts.”

Be in touch, Don, when you’re ready.